Holi Celebrations! Long weekend coming up. Travel on your mind. But still, wondering where to go? Say no more, humble travel buffs, we’re here to end your concern in a jiffy!

Holi is one of the most widely celebrated festivals in March in India. This holi-day, let’s celebrate Holi away from home! Travel to one (or two or three or maybe all) of these destinations in the country for the crazy Holi celebration in India. Check our list of best places to celebrate Holi in India to know more.

10 Places to Celebrate Holi In India

Holi is one of the most famous festivals of India. The festival majorly involves Holika Dahan (bonfire) on the first night, followed by a festival of colours on the next day. However, different regions of India celebrate this splendid festival differently. Without further ado, let’s have a look at all the awesome places to celebrate Holi in India this year. 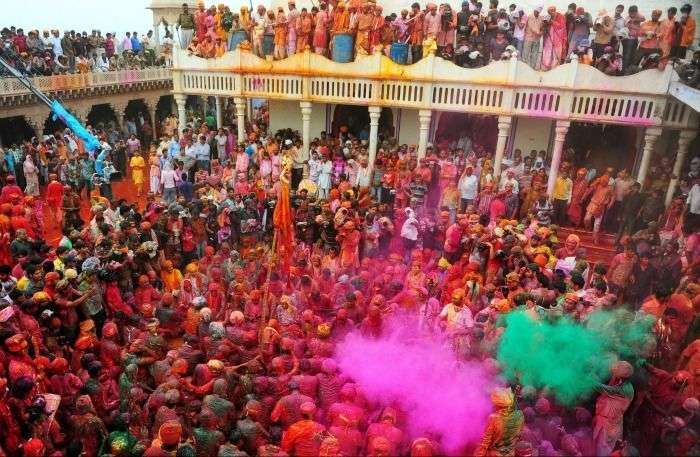 Holi is celebrated in great gusto and fervour in Vrindavan. It welcomes the advent of spring and bids good riddance to the cold chills of winter. Coming underway on Vasant Panchami, Holi marks a grand celebration in Vrindavan with huge processions of people smeared in different colours dancing to the tunes of the musicians.

On the Ekadashi before Holi, the city celebrates Phoolon wali Holi where flowers are thrown at the devotees by the temple priests. Another unique celebration of Holi in Vrindavan is the Widow’s Holi that began a few years back to break the convention that prevented widow’s from playing with colours or wearing coloured clothes.

From Royal To Offbeat, Here Are 30 Best Wedding Destinations In India To Tie The Knot In 2022! 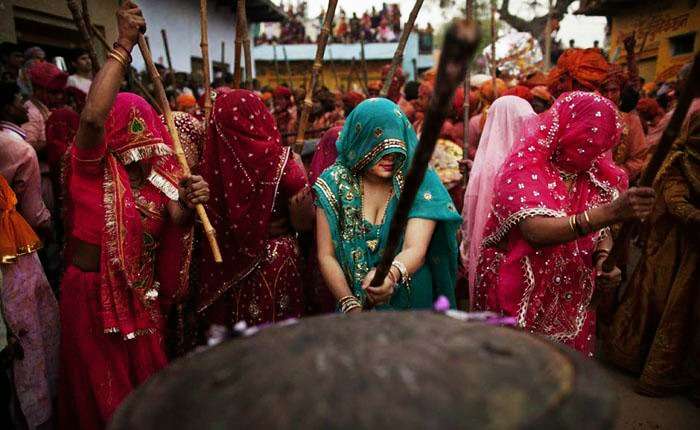 Another most famous Holi in India is Barsana’s Holi. In another bizarre tradition that has been followed for ages in U.P, the men are beaten up with sticks by women while playing Holi! Originating from a small village called Barsana near Mathura, the Lathmar Holi can actually be said to be the weirdest way of celebrating the festival. However, it’s quite a sight to catch the giggling women taking sheer pleasure in putting the sticks to use. Undoubtedly, Barsana witnesses the best Holi celebration in India. The Barsana Holi is certainly the most famous place to celebrate Holi in India and will give you all the vibes of Mathura Holi for sure!

Shantiniketan is an old and premier university in West Bengal, where the great Nobel laureate and poet, Rabindranath Tagore introduced the Basant Utsav to relive the ancient tradition. Till today the tradition is followed and celebrated in unmatched zest and vigour. Inspired by Holi and spring the students dress up in colourful attire and put on a huge cultural extravaganza for the visitors. All this happiness, colours, and joy of Shantiniketan makes it the best Holi celebration in India.

Note: The festivities take place a day earlier than the given date for Holi in other parts of India. 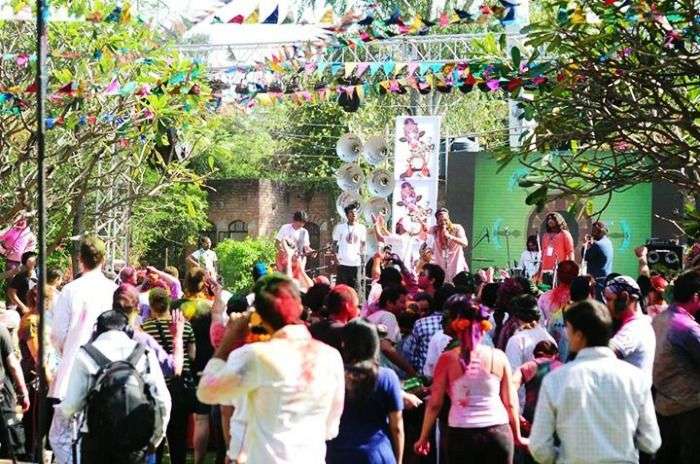 With kids turning into colour hooligans and elders crazy with fun and frolic, it’s a known fact that Delhi gets a little rowdy during Holi. But if you can get tickets to the ‘mad moozik’ festival, Holy Cow, which is one of the most happening festivals of Delhi, you are in for an awesome time. With a kickass line up including the country’s best independent music acts, Holi Cow is where every music lover flocks together in this spring festival. This year, experience the best Holi in India, in the heart of the country itself. For enjoying the festival of colours in a different way one of the most authentic places to celebrate holi in India is Delhi. 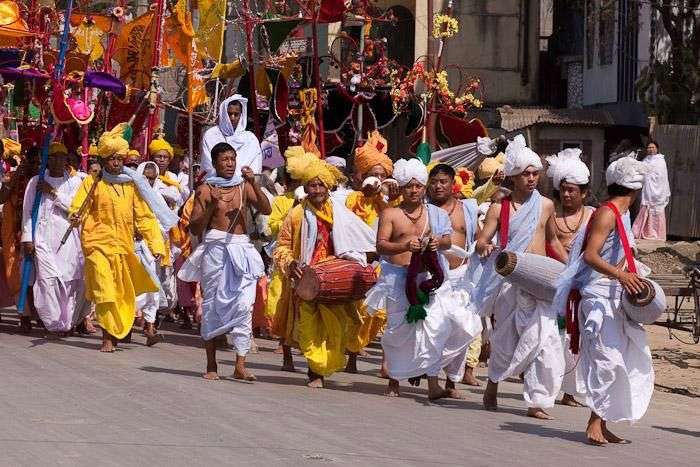 Commencing on the full moon day of Phalguna, Holi comes underway the great Yaoshang Festival of Manipur making it a six-day festival. It is quite a cultural extravaganza to witness with a number of folk dancers and musicians performing amid fluorescent lamps and bonfires are put ablaze while people play with gulal. Since the very beginning of Vaishnavism these two Manipur festivals are celebrated here.

16 Winter Honeymoon Destinations In India In 2022 The celebrations of Holi in Punjab by the Sikhs differ from the entire country in many ways. Locals shout their hearts out following a tradition. Furthermore, they exhibit their martial arts on this day and have fun with colors in the evening. Delicious halwa, puris, gujias, and malpuas are eaten and served to others. It is definitely one of the best places for Holi in India. 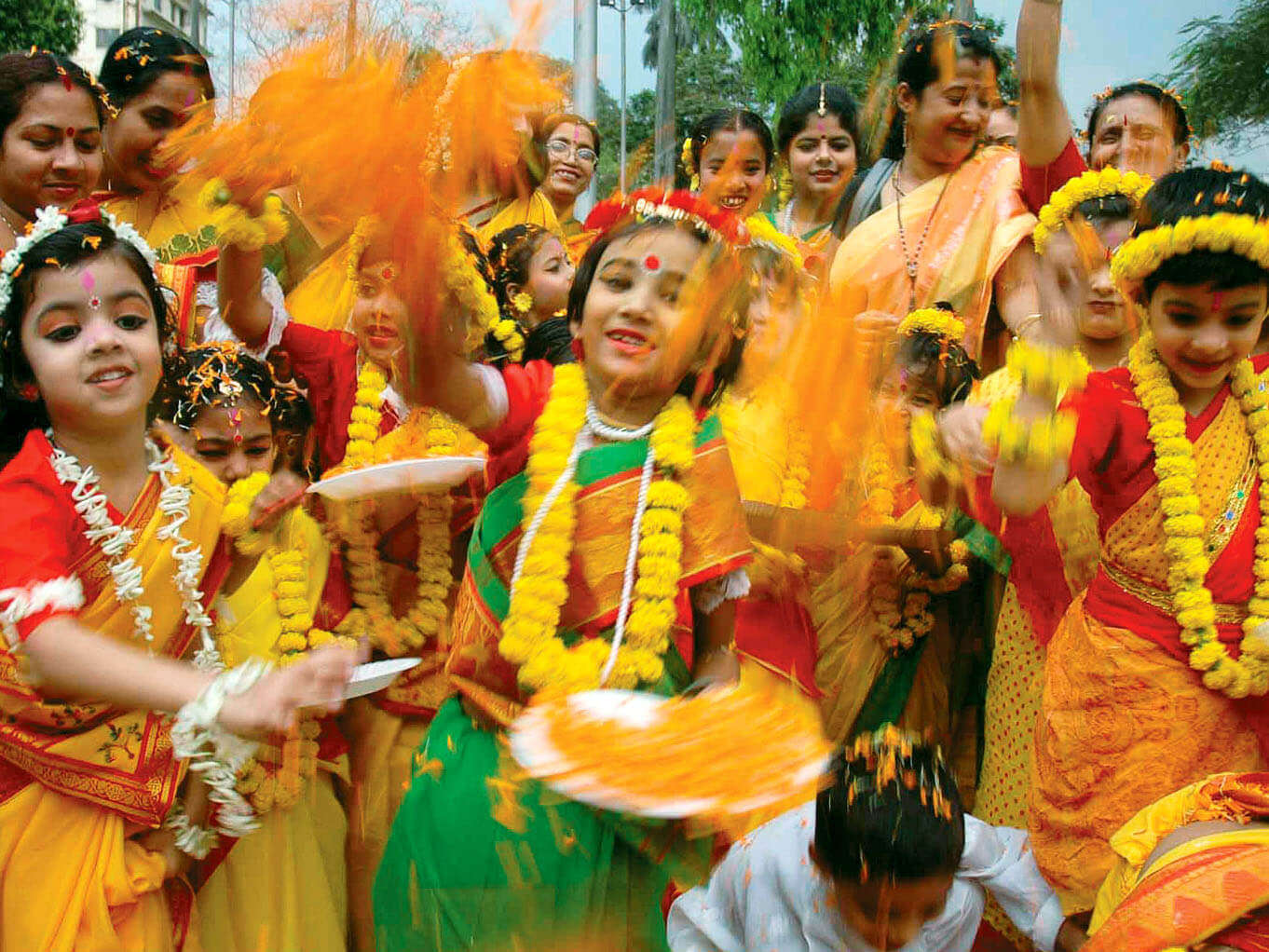 A 3-day-long Basanta Utsava is a folk festival celebrated in the Purulia district of West Bengal. It begins before the actual Holi. People of Purulia sing folk songs, dance, and exhibit their unique folk art. The different forms of folk dance include the stunning Chau, Darbari Jhumur, and Natua, while the famous popular Baul musicians of WB sing melodious songs making it the best Holi in India. This will surely give you a glimpse of the glorious festivals in March in India. 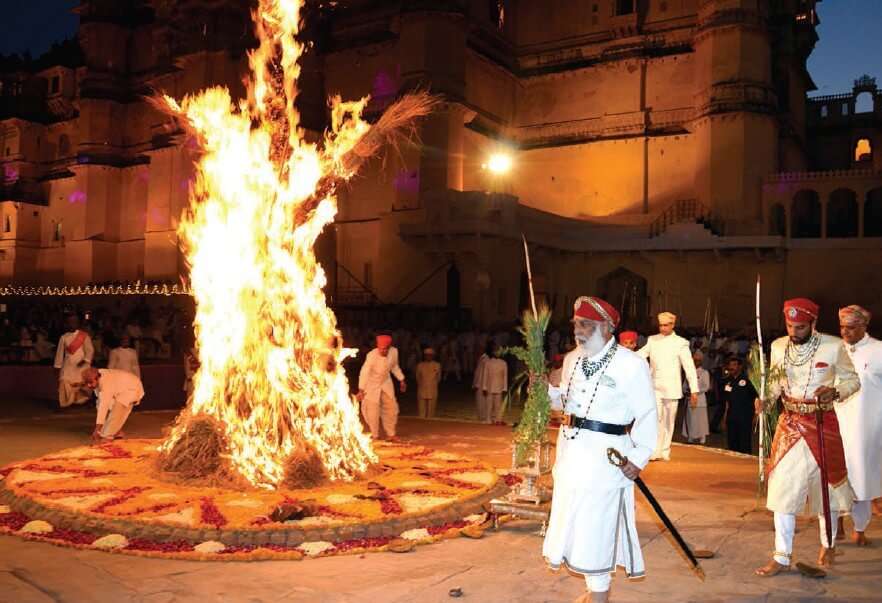 Holi in Udaipur is absolutely spectacular and royal. On the day of Holi, The Maharaja of Mewar welcomes honourable guests, foreign tourists, and many dignitaries to The Royal City Palace. The Maharana arrives at the celebration wearing traditional clothes and a bonfire is lit in the expansive ground of the palace. The bonfire signifies the triumph of good over evil. There are drums folk dances and folk songs followed by cocktails, a lavish dinner, and wonderful fireworks. Udaipur is definitely one of the best places for Holi in India. 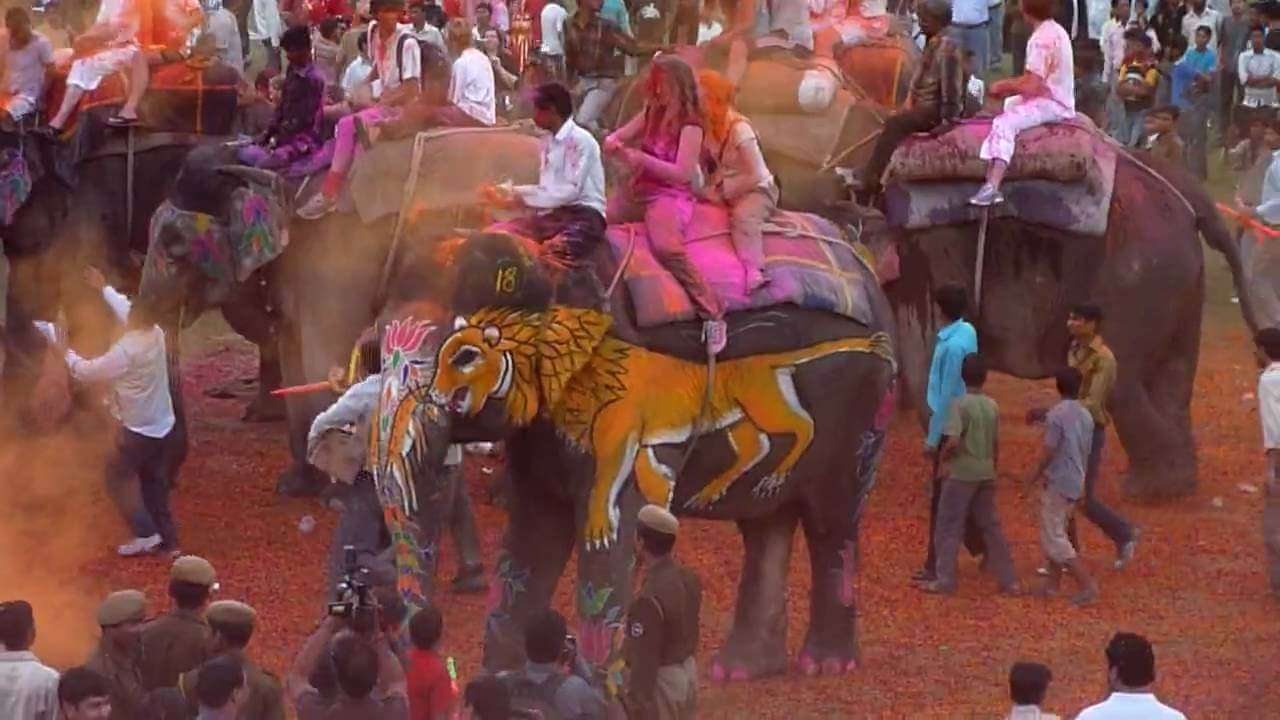 Jaipur is probably among the best places to celebrate Holi in India. It’s not just the enthusiasm of the people of Jaipur that makes it a fun city to celebrate Holi, but also a great effort of Rajasthan Tourism that organizes a special event for visitors on the lawns of Khasa Kothi Hotel. This event features Rajasthani folk dance, song performances, and a festive lunch. Even if you’re not a guest of this hotel, you can attend an event.

So which of these, according to you, is the best place to celebrate Holi in India. Getting beaten with sticks, rocking at a concert or balancing yourself in a human pyramid? Whatever you decide make sure to get the most out of this Holi, for it’s here to welcome the spring season.

For our editorial codes of conduct and copyright disclaimer, please click here

Where is the best place to participate in Holi in India?

Some of the best places where you can witness some craziest Holi celebrations include Jaipur, Vrindavan, Delhi, Udaipur, Uttarakhand, Awadh, and Purulia.

Is Holi celebrated in Goa?

Goa has a significant number of Hindu population, which means it is celebrated there. There are many Holi parties that are organized in Goa during Holi week.

How is Holi celebrated in Goa?

Since Goa has many Hindus, this festival is celebrated with great enthusiasm for almost a month and is a part of the spring festival Sigmo. The celebration includes Holika Puja, in which people offer gulal to their deities.

How is the festival of Holi celebrated?

One of the most popular and biggest festivals of India is Holi. It is a 2-day long festival, the first day is called ‘Choti Holi’ and the second day is ‘Rangwali Holi’. On the first day, Holika bonfire is arranged in the evening where people pray to God to cleanse their internal evil. On the second day, starting from the morning, people start playing Holi with herbal colours and water. The scene of chasing one another to throw Holi colours or coloured water is common on the day of Holi in India.

How we can make Holi festival eco friendly?

Use organic colours or use flowers and leaves to make your own colours, and do not waste water.

GET TO KNOW OUR NEW THAILAND GM

15 Sexiest Infinity Pools In Asia You Will Never Want To...