India is an ancient land with culture and tradition hidden in every nook and cranny. Every corner of this country has a different story to tell. Indians celebrate their festivals with pomp and vigor. This phenomenon is best exemplified in Southern India which takes things up a notch. The orthodoxy and systematic approach of their festivals is apparent even today. From the land of Sangam literature to the destination of Sage Agastya, festivals celebrated in south India spark the curiosity of one with a spirit of natural enquiry and bedazzle anyone who witnesses the grandeur of the same.

Does Onam lift your spirits or do you wait patiently for the colorful Hampi utsav? Check out these amazing festivals celebrated in South India which elevates our conscience to that of synchronicity with nature. 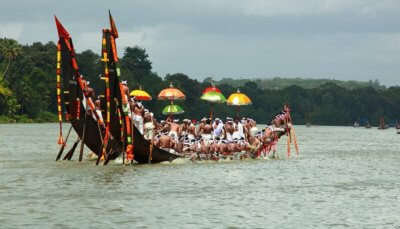 Onam involves a melting pot of colours and flavours from across “God’s Own Country” and the celebrations reach their zenith on the auspicious day of Thiruvonam. Onam is one of the festivals celebrated in South India to commemorate the return of a mythical, righteous king – King Mahabali and to bring together communities across the landscape. Houses are decorated with mesmerizing floral carpets (Pookkalam), traditional art forms and are cleaned to the last stain. One can see elaborate sumptuous feasts (Onasadya) served in every single home, with the feast ending with delicious payasam (Kerala dessert).

Top 19 Winter Festivals In India You Must Attend In 2022! 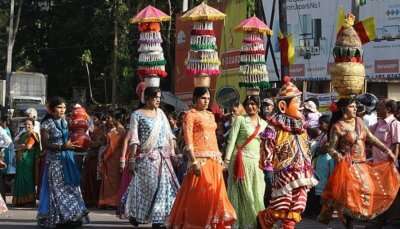 The tradition of the 9-day Karaga was started and sustained by a Tamil speaking community of gardeners called Thigalars. The Karaga festival is held at the Dharmaraya Swamy Temple in Bangalore. Just after dusk on the Karaga day, a priest dressed in female attire leads a spectacular procession,accompanied by breathtaking swordplay by a number of dhoti-clad, bare-chested Thigalars. On his head, the priest carries a flower-bedecked pyramid. A unique feature of the Karaga is the unbroken tradition of visiting the tomb of an 18th-century Muslim saint every year which strengthens the communal bonds between different communities.

Date: Full moon day of Chaitra, March/April as per the Gregorian Calendar
Venue: Throughout Karnataka 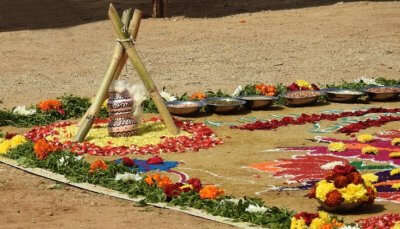 Pongal is one of the most popular harvest festivals celebrated in South India, mainly in Tamil Nadu. Pongal falls in the mid-January every year and marks the auspicious beginning of Uttarayan – the sun’s journey northwards. Pongal festival usually lasts for four days. This four days long festival of Tamil Nadu is celebrated by showing gratitude to nature. The literal meaning of Pongal is “spilling over” and it has been named so because of the tradition of boiling rice in a pot until it starts overflowing. Other traditions of the celebration include drawing of Kolam, swinging & cooking of delicious Pongal.

Jaisalmer Desert Festival: An Extensive Guide To The Desert Carnival In 2022 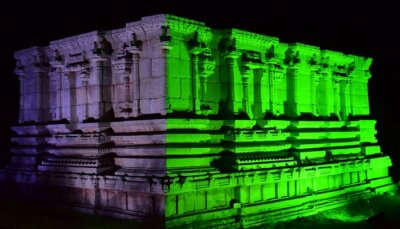 Hampi Utsav, also known as the Vijaya Utsav. The festival of Hampi has been celebrated from the era of the Vijayanagara empire. This event has been recently renamed as the “Nada Utsava“ by the Government of Karnataka. Hampi is a World Heritage Site and the festival it hosts attributes to the mega cultural extravaganza. Renowned artists from all over India come and perform at this festival. The rich culture of Kannadigas in the fields of dance, music and art complements the beautifully carved ruins of Hampi. 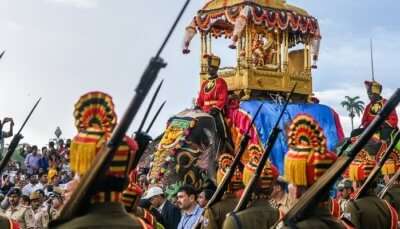 Mysuru Dasara, the Royal Festival of Karnataka, is celebrated as a 10-day south Indian festival in Mysore. It starts with nine nights called Navratri while the last day is Vijayadashmi. The city celebrates this festival in a pompous way displaying the beautifully decorated elephants, camels and horses walking together in a procession. The city receives lakhs of visitors every year during the festive season.

Date: The tenth day of the Hindu month Ashvin which usually falls in September or October as per the Gregorian Calendar.
Venue: Karnataka 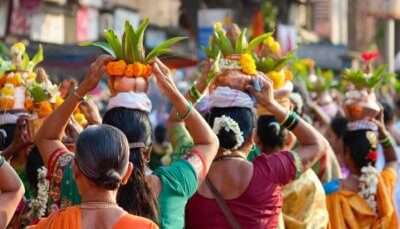 Ugadi is one of the festivals celebrated in South India, especially in Andhra Pradesh, Karnataka and Telangana. This south Indian festival marks the beginning of a new Hindu calendar year and is celebrated on the first day of “Chaitra” month, which falls in the months of March-April as per the Gregorian calendar. Ugadi is recognized by many as the day Kali Yuga officially began, when Krishna ended his time on earth. 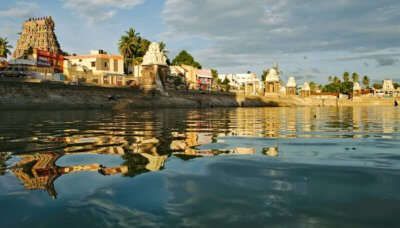 Mahamaham is one of the festivals celebrated in South India every 12 years in the Mahamaham Tank that’s located in Kumbakonam. This 20 acre tank surrounded by Lord Shiva’s mandapams is believed to be sacred. It is considered that on the day of the festival, the river goddess and Lord Shiva rejuvenate its waters. Thus the Hindus consider taking a dip in the tank as very auspicious. It is often said to be equivalent to attending the Kumba Mela. This festival is held over a 10 day period. Legend tells us that Lord Shiva came in the form of a hunter and broke the pot that contained the nectar of immortality when it came to rest here after the great flood ended the world. The water inside the pot is said to have created the Mahamaham tank.

Date: Expected to be celebrated in 2028 as it is celebrated when Jupiter enters the sign of Leo
Venue: Tamil Nadu

Ooty Summer Festival 2022: An Artistic Celebration Of The Southern Hills

With such a heavy variety of festivals, you are naturally bound to get lost in the intricate arrangements of these annual affairs. Now that you know all about the amazing festivals celebrated in south India and the many wonderful activities waiting for you. Book your trip to south India with TravelTriangle, and witness these enthralling celebrations!

For our editorial codes of conduct and copyright disclaimer, please click here.

What festivals are celebrated in South India?

What is the famous festival of Tamil Nadu?

Pongal is the most famous festival in Tamil Nadu. It is the harvest festival that lasts for four days and is celebrated in the middle of January.

Is it safe to visit South India during Covid times?

You need to follow all the mandatory travel guidelines suggested by the government. Always remain masked while stepping out and maintain social distancing. Complete both the doses of vaccination before planning your journey and get yourself tested at 48 hours before traveling.

What is the most important festival of Kerala?

Onam is the most important and popular festival in Kerala. Celebrated with much pomp and enthusiasm, Onam is a harvest festival. Onam is also called Thiruonam and it is celebrated at the beginning of the month of Chingam of the Malayalam calendar.

What are the 12 festivals of Kerala?

What is the Tamil new year called?

10 Incredible Places in Cambodia NOT Angkor